Your cart is currently empty.

Your cart is currently empty. 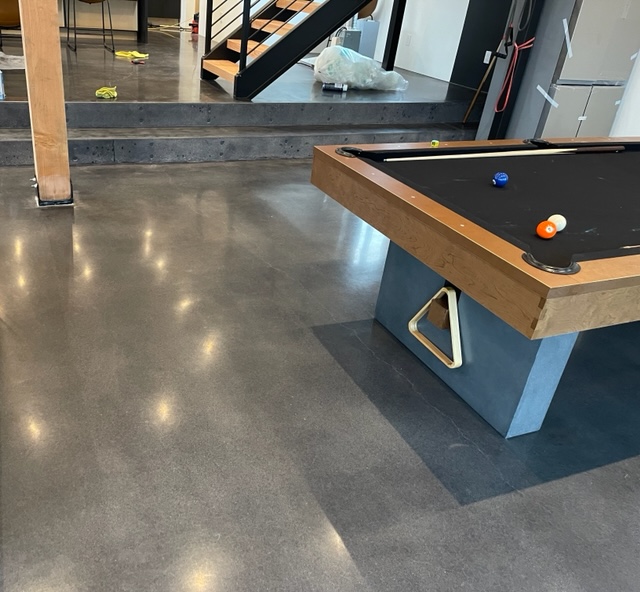 Victoria Concrete Surfaces is a concrete contractor in Victoria, British Columbia, that also polishes concrete. The company owner, Benoit Harris, found Solid Solution Products Camo Patch UV to be the perfect solution for repairing the floor in a 1,700 square-foot home. In this particular case, the home's floor was concrete across the entire expanse. Harris says the home's owners intended the floor to be untinted, normal colored concrete. However, the painter had over sprayed the walls and left white paint on top of the floor.

"The owners wanted that paint removed and restored to the regular color of the concrete," says Harris. "I assessed the situation and offered to polish the concrete floor a little bit — no grinding, but just hone it and polish it."

In doing that, they asked Harris if he would also stain the floor with a black stain. But, as he started polishing the floor, he found some large areas with pits. This was the result of the concrete being improperly finished by the previous contractor. The owner didn't know what to do, but Harris recognized that a product he had in his arsenal would solve the problem. "I told them I had started using Solid Solutions Products and now finally I had a product that could patch concrete and be made to match the concrete that was already in place," says Harris.

Harris had been in touch with Solid Solution Products owner, Brian Bowers, and Jason Claproth, the company's technical sales representative. They both gave him the tips he needed to perfectly match the colors.

"I was able to successfully patch this floor and match the color of the stain to the floor," says Harris. "This was a big deal to me because this customer had high expectations and we were able to solve the problem with a high degree of accuracy. And I was successful with this product with virtually no experience using it. The customer's very happy now."

Harris believes that what happened was due to the finisher not realizing that there were voids in the concrete. "There might be something inhibiting the finisher's vision of seeing where he's touching the concrete and where he isn't," says Harris. "And sometimes there are little voids underneath there that they don't notice. Or, if the height is off, they'll get a low void that they can't see."

In this case, the affected concrete was near a set of stairs. So when the stair forms were removed, holes had formed. When the concrete was ground down, these little voids were revealed. Even though the voids may be only the thickness of a few hairs, they are clearly noticeable when light causes them to cast shadows. Harris's philosophy is that when customers pay for high-end work, they should get what they want. "The Solid Solution Products are the link between getting that expectation to be set in stone," Harris says. Many contractors don't even realize that a patch job like this can be done.

Camo Patch UV is a rapid-setting, self-priming, translucent polymer designed for grouting and patching decorative and polished concrete surfaces. Success on a patch project like this first involves doing a little investigating to find out what aggregate was used on the original job. Once you acquire some of the same kind of aggregate, you simply follow the instructions on the package.

To repair as a patch, first prepare the patching mix in a ratio of equal parts A + B material (the polymer, measured separately). Place the dry mix (the matching aggregate) into the mixing container. Add B into the mix, then add the dry mix. After making sure the dry mix has full saturation, add the pigment and mix that with up to three parts of the matching aggregates. Then, add the pigment and mix again. Finally, add part A. This will leave you with about 3 minutes working time. 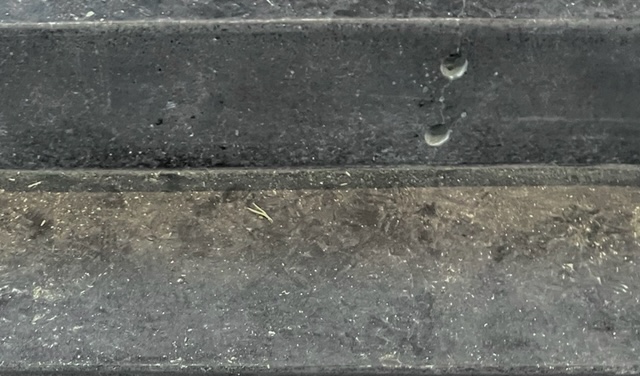 Harris has used this product a few times, and he says that it has solved a unique problem each time. "A strange request," he says, "like, you think 'That's not really important,' or 'That's not gonna work.' But ultimately the customer has a vision and it's cool when you can provide people with what they want and make it work." And the final, patched, stained, and polished black floor? "It's beautiful!" he says.

Someone purchased a
01RAC Racatac with 2″ Casters
minutes ago

Someone purchased a
01RAC3 Racatac with 3″ Casters
minutes ago

Someone purchased a
1-Gallon Industrial Acid Staining Sprayer
minutes ago

Someone purchased a
10" Grinding Plates
minutes ago

Someone purchased a
10" Octagon Tile Style - Concrete Stencil
minutes ago

Someone purchased a
10.63" ShinePro Maintenance Pad
minutes ago

Someone purchased a
11" Red Tooling - Plain (No Diamonds)
minutes ago

Someone purchased a
11" Wire Rotary Brush
minutes ago

Someone purchased a
12 – 16” CYCLONE BLADE
minutes ago

Someone purchased a
12" x 17" Interlaken Trench Grate
minutes ago

Someone purchased a
12" x 18" Oblio Trench Grate
minutes ago

In Stock Out of stock